CENTRINNO has taken one more important step in its quest to support the emergence of innovative Fab City Hubs in nine European pilot cities.

While the pilots are now entering their first sprint in their respective cities, CENTRINNO’s partners are carrying on a relentless study of different prototypes and models of creative and productive hubs. To integrate these models into the project’s values and objectives, a specific task has been created.

The first step has brought to light in the first months of 2021 the “Creative and Productive Hubs Journal”, an ambitious research project that reviewed some of the most remarkable hubs in Europe and identified a series of guiding principles for the creation of a Fab City Hub.

The new task will focus on providing the pilot cities with more knowledge and insight on typologies, organizational structures and governance models of creative and productive hubs. This will eventually pave the way for the creation of the Fab City Hub Toolkit, which will point out the most important tools and methods to implement in each pilot city.

To make this ambition a reality, the European Creative Hubs Network (ECHN), in collaboration with other partners such as Volumes, IAAC and Waag, has created “Building Fab City Hubs”: inspiring stories and insights.

This new endeavour consists in a series of inspiring sessions with the pilot cities and different guest speakers, experts in some of CENTRINNO’s key concepts, like Social Inclusion, Vocational Training and Heritage. Each session will take place monthly and each month will be fully dedicated to the respective session’s key concept.

Each session will be an opportunity for the pilot cities to be in dialogue with different experts and to combine their perspectives on CENTRINNO’s key concepts. As a result of these conversations, we will be able to gather a first batch of content for the future Fab City Hub Toolkit.

The first session of the series is taking place on the 16th June. For our first appointment, ECHN is inviting Vassilis Chalarampidis, co-founder and artistic director of BIOS, cultural organization and first creative hub in Athens. This centre, focused on the arts, urban life and creative industries, has initiated Romantso, the first creative hub in Greece. 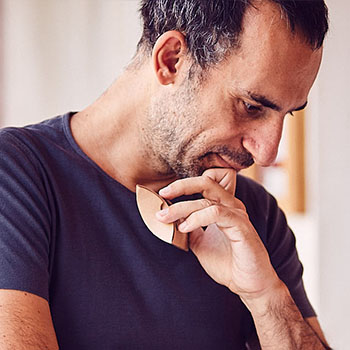 Vassilis is also a founding member and president of the board of the European Creative Hubs Network (ECHN), a peer-led network that has been created to support creative hubs as focal points for creative professionals and creative production, to connect and empower the creative industries field as well as to shape equivalent strategies at a national and European level. Vassilis has devoted himself to pioneering a creative based approach to social entrepreneurship, good practices and policy, with his main focus currently being social inclusion and regeneration in the creative industry sector.

With Vassilis, we will explore methodologies and solutions that Romantso has adopted to be more inclusive and open to the city of Athens. BIOS-Romantso has been a model also for the Athenian municipality, which emulated the hub’s approach to Social Inclusion. Projects like the “Creative Neighbourhood”, an initiative that involves the citizens of the local district, will be of inspiration for the pilot cities and their trajectories towards a Fab City Hub.

The first session will be only the beginning of a fruitful series of sessions offering insights to governance and organisation of a Fab City Hub to the pilots. With this task, CENTRINNO’s partners are aiming to exchange with pilots and fuel them with tools to be used and adapt to their own context and ecosystem. Ultimately, this joint effort will shape the main features of CENTRINNO Fab City Hubs.

In combination with the sessions, ECHN has developed an additional tool that will be central for the accomplishment of the task: the Open Diary. 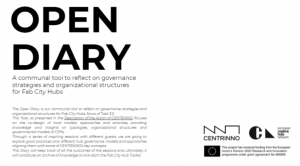 The Open Diary represents an internal online document to navigate the three sessions, extract the main findings and build up on the precious work that has already been done in previous tasks of CENTRINNO. This document is structured in a way that helps the pilot cities orientate among the Building Fab City Hubs sessions’ concepts and objectives, facilitates their interaction with the guest speakers and contextualises the whole discussion within CENTRINNO’s framework.

The three main functions of the Open Diary, guidance, interaction and context, are integrated with each other:

The task is now ready to take off!