It has been a while since we know education goes beyond the time we spend at schools and the space of the classroom. Training and the development of personal and professional skills is a life-long process in which many actors and spaces are usually involved. Nevertheless, opening educational and training programs to the world outside the classroom poses many challenges. Even for vocational training, which is often considered a more hands-on and less academic learning experience, this is a difficult task. Leaving the safe space of the school and exposing students and teachers to professional contradictions and timeframes or societal problems complexity, doesn’t always match with educational terms, exam periods or the specialized nature of many formal training programs. The real world is multidisciplinar, involves negotiations with many actors and doesn’t follow semesters.

CENTRINNO is exploring different ways for Fab City Hubs to become new places for learning. Within this effort, the Barcelona pilot is trying to connect local and global challenges, as well as communities’ strengths, with formal vocational training programs to foster the potential for local innovation in the Poblenou neighbourhood. In October 2021, 64 students from eleven vocational training centres from Catalonia took part in the Barcelona CENTRINNO School Hackathon.

A six-step design thinking methodology guided students through an intense process to prototype ideas that answered the local challenges. A student-size cube canvas, post-its mapping, brainstorming sessions, or presentation pitches took students outside their comfort zone and into a collective hands-on discussion. The diverse profile of both students and local organizations gave the possibility for all teams to understand and reflect upon the complexity and multilayered nature of existing initiatives in the neighborhood, while providing room to explore, ideate and prototype potential solutions to overcome local societal challenges.

The Barcelona CENTRINNO School Hackathon was hybrid and distributed. Students met through an initial online session in which they had an overview of the CENTRINNO project and different challenges proposed by local organizations. During this session, they also chose which challenge they would work with through a plenary participatory activity in which students’ informality challenged the usual online meeting constraints. During the two following days, activities took place at different sites around the neighborhood, including working sessions in vocational training centres, but also visits to the local initiatives who had proposed challenges, and a plenary session in Can Ricart, an emblematic industrial heritage site of Poblenou. For the closing session, students prepared a short pitch and presented their ideas using the cubic canvas, including a proposal on how they would develop them within their educational courses throughout the next three months.

The six different challenges proposed by local organisations were connected to important CENTRINNO-related topics, such as the circular economy, the potential of local heritage or the importance of citizen participation in public spaces.

Col·lectiu Superilla, a citizen association that supports the public space interventions of Poblenou’s superblock, challenged students to give more visibility to the superblock urban model from the point of view of its neighbors.

Taula Eix Pere IV, a local organization that supports local heritage valorization and promotes social and solidarity economic activities in the Sant Martí district, focused their challenge on how to activate the public space of Ca l’Isidret passage and engage local neighbors in its transformation process.

BAU Design College of Barcelona was looking for a new life for 500 unused textile bags that they had in stock due to the renovation of their institutional branding. Eix Comercial del Poblenou, an organization that supports local businesses, proposed students to think of circular and alternative ways to encourage local shopping in small neighbourhood stores. These two initiatives linked their challenges to the environmental benefits they could offer to the neighborhood.

Under a similar approach, ConnectHORT, an urban garden and community space of Poblenou, challenged students to explore how to better recognize the positive impact of green and participatory spaces in the neighbourhood. Lastly, Smart Citizen, a citizen sensing initiative performing local environmental data analysis, asked hackathon participants to think of new ways of combining technology and people to establish or support local communities of practice around monitoring environmental problems.

The results and ideas proposed by the student teams were as diverse as the challenges. They ranged from a board game prototype to disseminate and highlight the potential of community gardens, to an app that shows the history of local shops through personal stories, or a textile pencil case prototype that could be improved, made and sold by a local NGO that works with vulnerable communities. Each team proposed a multi-approach solution to their challenge, so all members could participate in a potential future development. 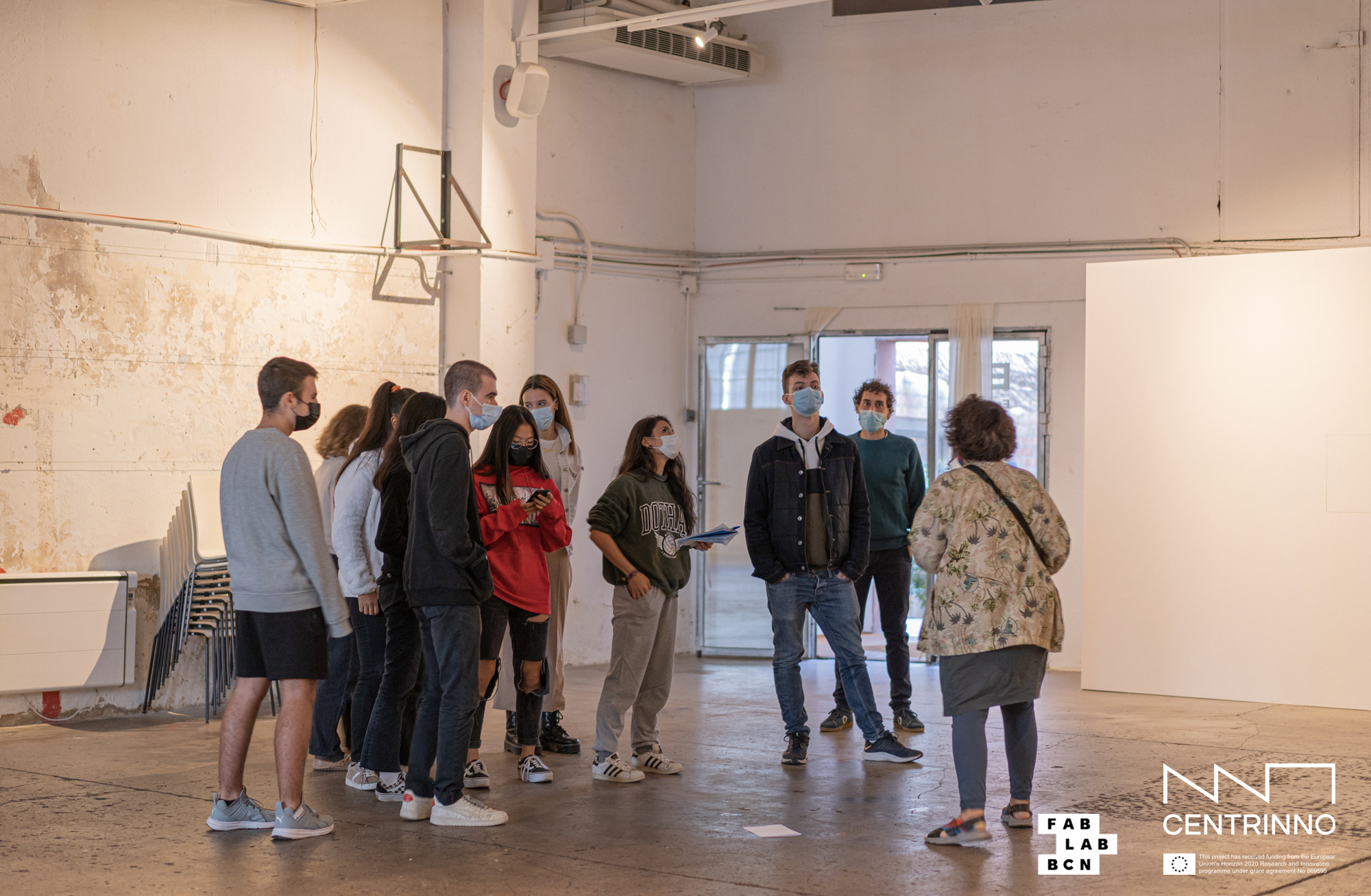 What else is the CENTRINNO School doing in Barcelona?

The Barcelona CENTRINNO Hackathon was one of the activities led by the local pilot in 2021. To make this possible, Fab Lab Barelona and CatalunyaFP have been working on parallel activities since the beginning of the project in order to identify opportunities to link the vocational education system with community’s and societal real challenges. Among the different activities, the pilot team developed and implemented a three-day official training program for vocational training teachers entitled “The co-creation of sustainable economy and social inclusion projects in the field of Vocational Training”. A group of 16 teachers from various centers of Barcelona was invited to share experiences on how to work with students outside the classroom. During the course, they visited three local organizations and two heritage sites of Poblenou to test and discuss how to translate local problems into challenges that students could work on during their courses. This experience, as well as the contact with the teachers, were key to setting up the foundation of the Barcelona CENTRINNO School hackathon.

All CENTRINNO School activities are aligned with Barcelona pilot’s missions: empowering the rise of new circular players and practices in the market, combining existing methodologies of vocational training with ‘making’ skills, or fostering the development of an inclusive, creative and productive neighbourhood. Moreover, the local pilot has also been exploring how historical heritage sites can be used as arenas for stimulating students’ and citizen creativity and awareness by testing new approaches and uses of these sites. 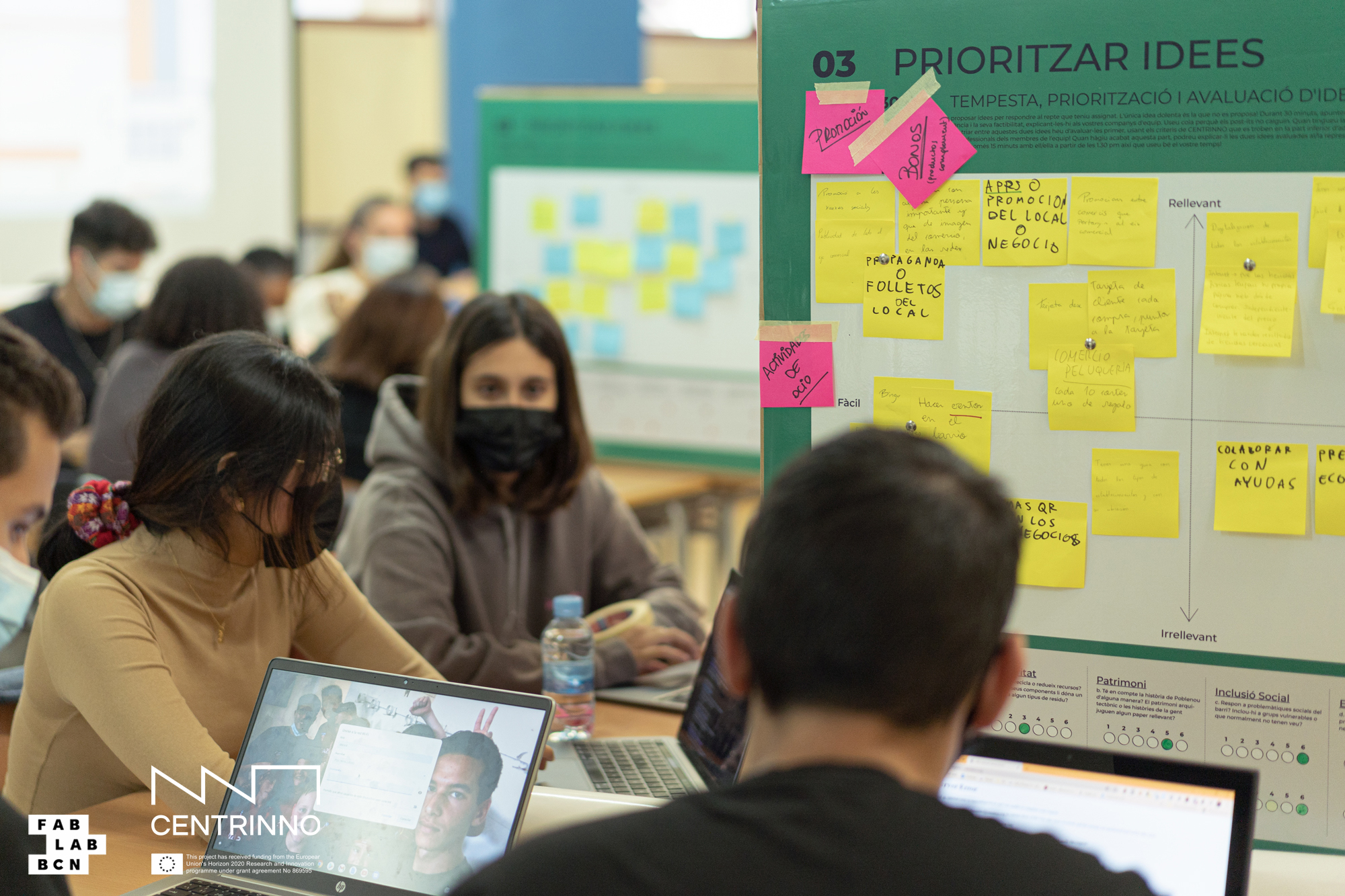 We could already see some positive impacts of the hackathon a few days after the closing session. Teachers whose students participated in the event asked the CENTRINNO pilot team to share with them the canvas and methods that guided students during the ideas prototyping process. Some schools are already implementing similar alternative methodologies to engage students with existing companies and organizations, related to those centres. One of the two institutes which space was used during the hackathon hosted an exhibition showing the cubic canvas and some of the hackathon results in their main hall, reaching more than 600 people from their educational community. Four of the twelve teams have continued the conversation with the local organizations to explore the potential of collaborating through their vocational training courses. The CENTRINNO Barcelona pilot is keeping track of all these initiatives and spin-off activities so they can be supported and nurtured under the pilot’s umbrella, contributing to a more productive and creative neighbourhood in Poblenou.

The Barcelona CENTRINNO School hackathon showcased the potential of a distributed and multidisciplinary approach connected to vocational training. It had a positive impact that can already be seen in the short term, but most importantly will be one of the first professional experiences for many of the students who participated, positively influencing the way they perceive their professions and the agency of their future work. Maybe this is one of the multiple ways for a Fab City Hub to become a place for learning and foster a productive local community. Currently developing its own Fab City Hub model, this experience has been key for the Barcelona team to expand the limits and set up new horizons for future pilot activities. 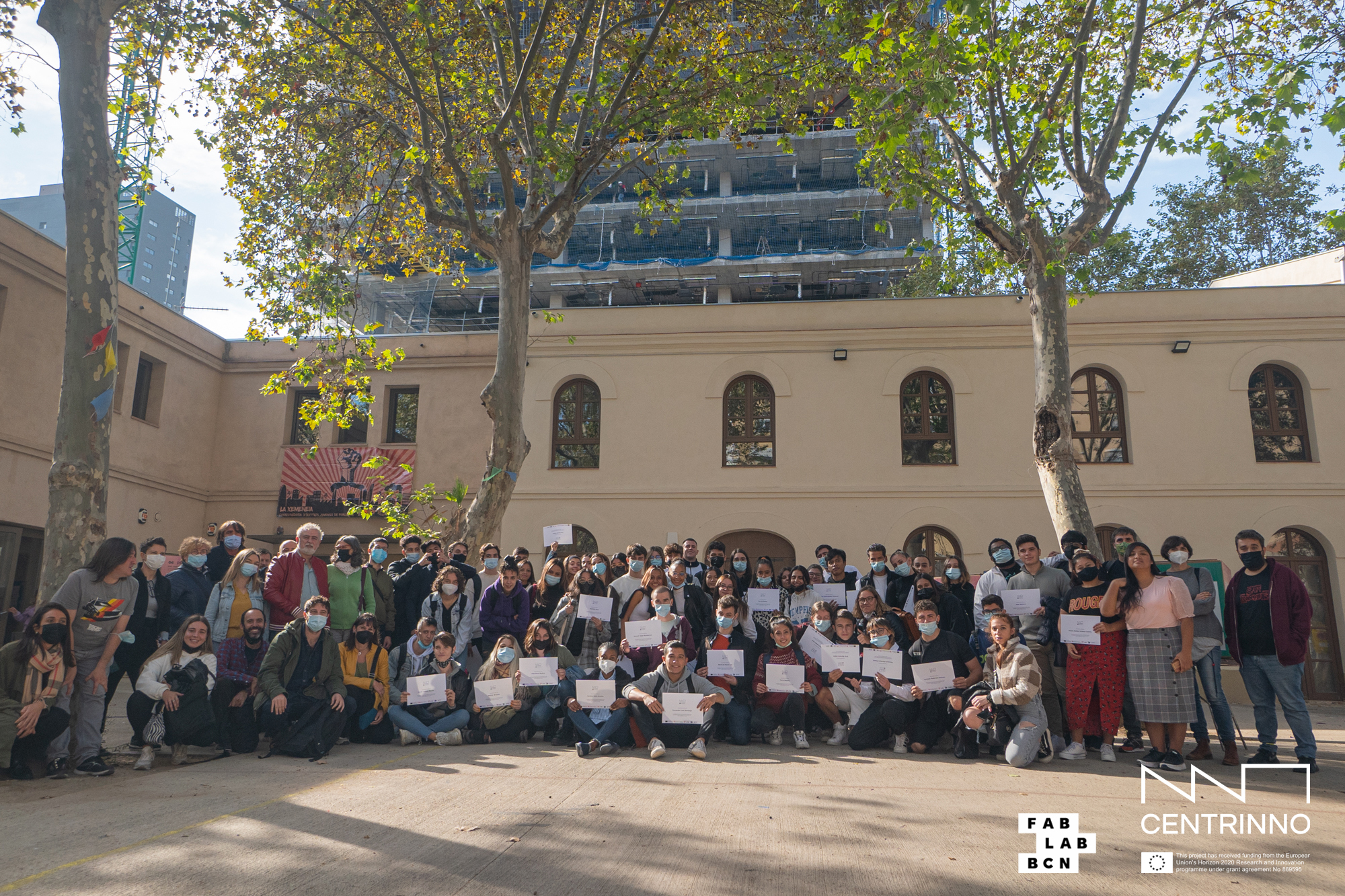