Since the beginning of the Centrinno project, September 2020, the Milan pilot action – of which Manifattura Milano is one of the main activities – has always supported the importance of creating synergies and relations with a network of micro and small organisations united by the will and interest in creating an urban and circular manufacturing.

All the activities organised in the first year of the project were designed primarily to create that framework of dialogue and sharing with local companies, welcoming their needs and enhancing their potential.

During the Fab City Residency, the second creative residency organised by Manifattura Milano, textiles were chosen as the thematic focus, and more generally how to create circular economies in the neighbourhood starting from waste and deadstock of companies close to the city; a path that involved international designers, urban tailors and ateliers, hotels, fabric producers and representatives of the Milanese association world.

The starting materials, with which the two designers involved, Sara Alvarez and Tobia Cecchin, were able to co-design, arose from a mapping and networking process aimed at identifying a whole series of companies and organisations that have stocks of fabrics that are unused because they are in short supply or cannot be sold because they have small defects.

In this first phase of experimentation, the contribution of a historic Milanese hotel, the Grand Hotel Et De Milan, which donated a number of high quality cotton sheets with good reuse potential; Tessitura Grisotto based in the Varese area, founded in the late 1950s, which provided a number of rolls of multicoloured cupro, a fibre derived from cotton and similar to silk or viscose.

Lastly, the stockist Guerra of Gallarate who contributed a number of sample fabrics.

Thanks to the support of Spazio3R – a sustainable tailoring atelier that provided skills and machinery to the two designers – a synergy was created representing a virtuous example of circular economy on a neighbourhood scale. 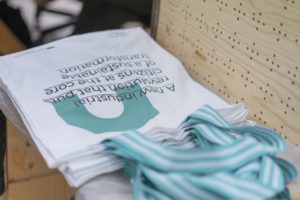 At the end of the residency, we immediately set ourselves new goals and new projects that would go precisely in the direction of creating these ‘circular bridges’ not only between raw material companies and processors, but to become possible accelerators of urban economies ourselves, creating the Manifattura Milano meta-brand with the aim of emphasising the process of dialogue and co-design of the manufactured products, representing the values of the producers who are part of it, and above all making it possible to increase demand and visibility for products born in this context.

The first product with Manifattura Milano’s meta-brand alongside that of Spazio3R took shape at the Consortium meeting of the Centrinno project held in Barcelona at the end of May. During the preparatory phase of the meeting, it emerged that IAAC, the host institution, needed to donate a shopper to some 75 participants.

At that point, it came natural to build on our experience. Having made prototypes during the residency and still having a lot of material available, we proposed to produce the bags in Milan in collaboration with the local organisations that had participated in the prototyping phase.

The Spazio3R tailor’s shop with the support of WeMake for the laser cutting of the labels from the cupro, and then the two-colour printing by Muralestremo, an artisan screen printer, produced a shopper bag from the sheets donated by the hotel.

The final result represents the first example of circular urban manufacturing created within the project and the starting point for the creation of a catalogue offering a whole series of possible Manifattura Milano branded design products.

The meta-brand project is currently in the experimental phase and represents a concrete example to test how it is possible to activate a demand for products made on a small market scale by intercepting fractions of materials often abandoned to the recycling stream. 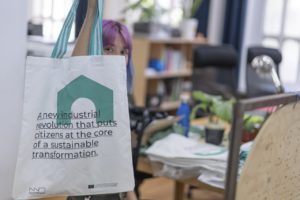 How to create a circular community.

From the very beginning of the project, we asked ourselves what process to create and how to interact to grow and nurture a community focused on circular manufacturing principles with urban and local market dimensions.

In the beginning, we mapped the state of the art of Milanese manufacturing activities, understanding their needs and business intentions.

Once the starting numbers were established, we prepared a form for expressing interest in joining the Manifattura Milano community.

The form was designed as a questionnaire to keep collecting all the information necessary to fully understand the characteristics of the applicant and, in the long run, to be able to include them in what will be the Map of Urban Circular Manufacturing in Milan.

From the point of view of engagement, we worked on two tangent levels: on the one hand, we started working tables to co-design and develop new synergies starting from the needs and projects of the participants; on the other hand, we organised training and orientation moments to facilitate the birth of shared projects and stimulate practical and theoretical skills to implement circular processes in urban manufacturing.