The Copenhagen pilot aims to explore how to combine the urgent needs of urban development while preserving the industrial heritage and its local communities in the former industrial area of Copenhagen Northwest. The main objective is to foster the creation of a distributed network of existing hubs capable to preserve this mixed and vibrant landscape while fostering sustainable and inclusive urban communities and environments.

Challenges in the pilot area of Northwest

In the initial phase the Copenhagen team engaged in a thorough analysis of the pilot area, including data collection and interviews with key stakeholders in the area. The research revealed two main challenges:

Based on the main challenges the pilot work with three overall missions:

The Copenhagen pilot took its first steps in the beginning of November 2021 towards creating a network of expert actors within relevant fields of urban development and creative environments. The effort took place in the form of a kick-off event at the pilot site Northwest, which aimed at establishing relations with the local and national partners, who wish to be a part of CENTRINNO’s ecosystem. The event posed the question; How do we create urban development with room for creative urban environments in Copenhagen? 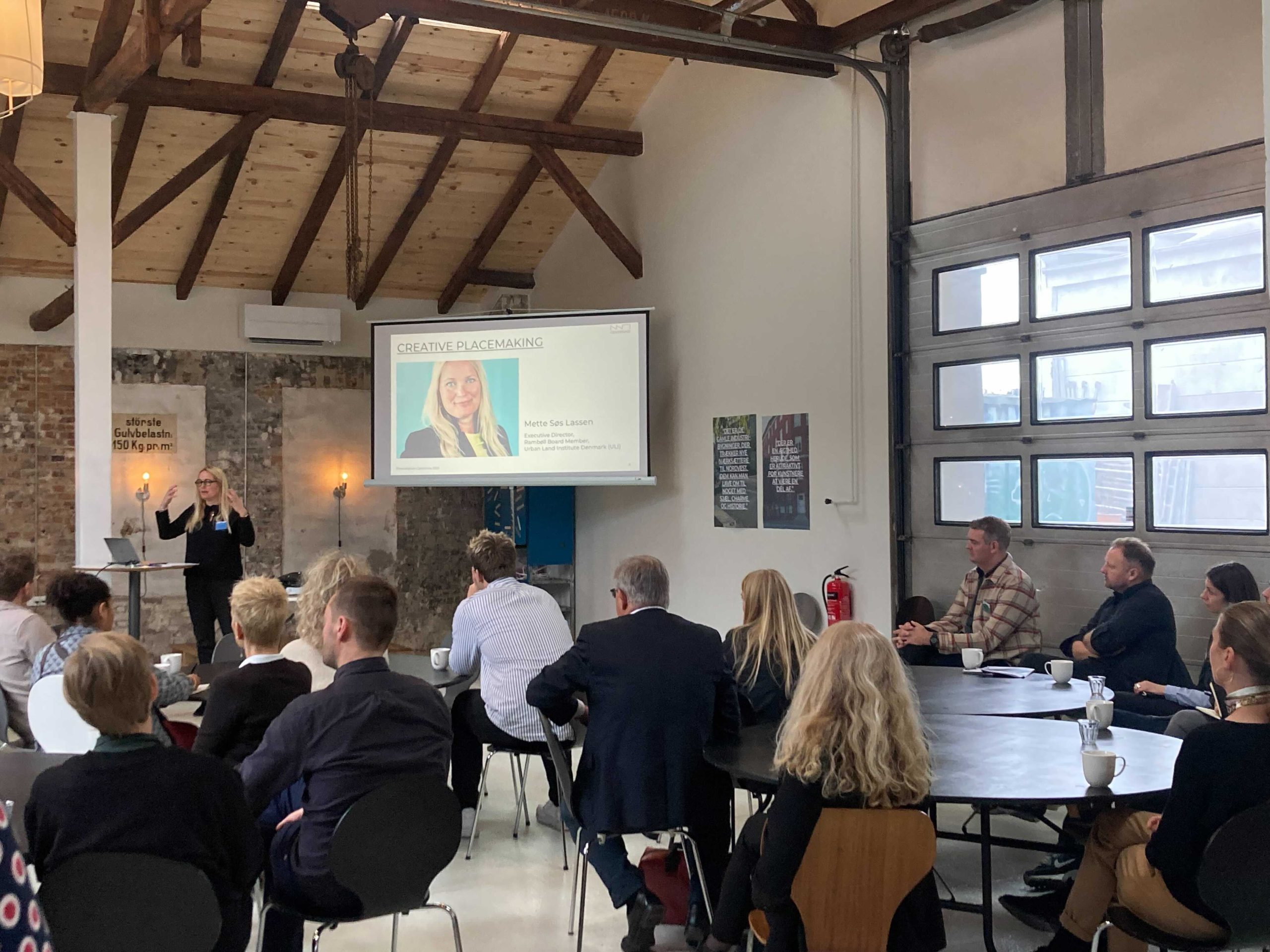 Expert network event within the field of urban development. Photo by Copenhagen pilot.

In conclusion, bringing together urban development actors from all over Copenhagen worked as a way to get closer to businesses and creative communities and is a valuable step in developing new business models for partnerships, as well as further exploring and testing the potential for creative placemaking as a model for the contemporary gentrification challenges in urban Copenhagen.

The input and experiences from the first half of the project have resulted in recommendations that will feed into the upcoming planning strategy for the City of Copenhagen in 2023.  The City Council recently allocated a pool in 2023 and 2024 for strategic business development in creative urban environments and support for creative industries and the ambition is to continue to secure a political anchor for the CENTRINNO agenda in Copenhagen.

The Copenhagen pilot is testing a distributed hub model structured as a network of existing local creative actors and spaces that aims to support local initiatives and foster exchanges and opportunities among stakeholders through networking events. In September the pilot invited local creative actors, private developers and members of the local committee to a network event in connection with the local Maker Faire at the Maker Space NV. 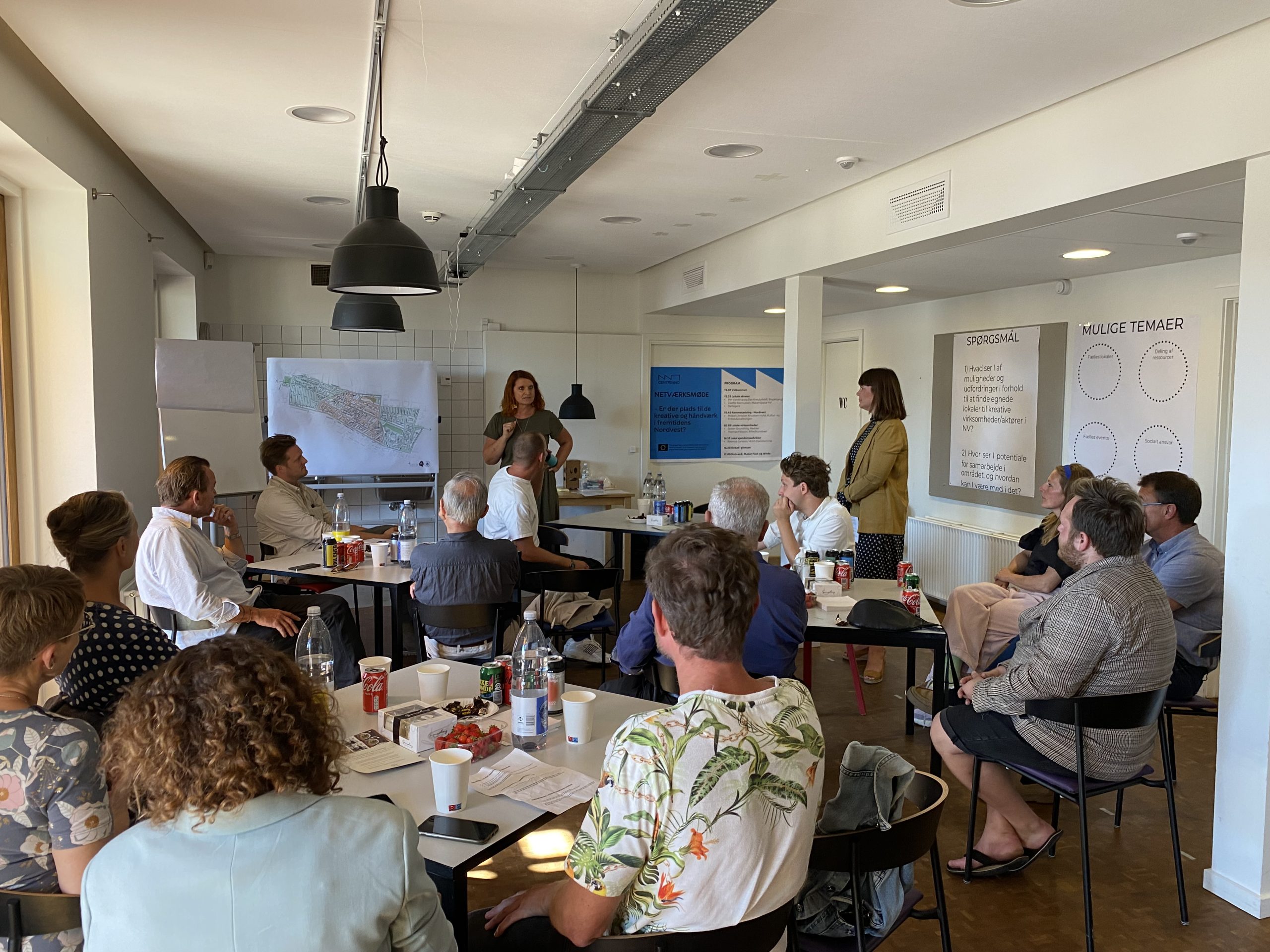 Local creative business and private developers presented and discussed challenges and opportunities for collaboration and how to combine urban development while preserving the industrial heritage and maintaining a thriving neighborhood. The event functioned as a method of gaining insights into the stakeholders’ needs as well as sharing of experiences, barriers and good examples. For example opportunities for sharing local resources and facilities and other relevant input that will feed into the coming network events in 2022 and 2023.

There is a great potential to exploit the synergies between the existing youth educational institutions, the local public school, the local Maker Space and local businesses located side by side in the pilot area. In the first half of the project a partnership with the youth vocational school NEXT and the local Maker Space NV has been formed. For the second half of the project various activities will be carried out focusing on young people’s knowledge of and access to vocational training and crafts to support social inclusion, innovation and production and strengthening the reputation and heritage of crafts in the neighborhood.

The upcoming CENTRINNO school activities will, among other, include innovation, design and construction projects in collaboration with NEXT and the local Maker Space. School students and schoolteachers will together with professionals build skills in creative and practical subjects and the young people will become familiar with a range of educational and job opportunities.

NEXT is the neighbourhood’s major vocational training institution building on the neighbourhood’s industrial heritage. Today NEXT’s workshop facilities and study environment is hidden behind high fences and closed gates. The activities will make their educational qualities visible and create pride in both the contemporary crafts and the historical imprint of crafts on the neighborhood.

Applying Emotion Networking as a tool to bring heritage into focus

A great focus of the Copenhagen pilot team has been to explore how to enhance the role of heritage when working with urban development, especially on an administrative level. In this regard the Emotion Networking (EN) method – initially developed by the Reinwardt Academy and Imagine IC – has played a key role.

EN has shown an effective tool to democratize the discussion on urban development initiating an inclusive and open-minded talk among local citizens about how to identify the identity and essence of a local neighborhood. Through a series of workshops and open events the Copenhagen pilot team has worked with the EN method and made it into a tool fit to the local context. It has so far shown to work well as a tool for local administrations to engage citizens in the task of developing an area with its unique heritage in mind.

Throughout the CENTRINNO project there has been a close collaboration with the local committee based in the Copenhagen pilot site of Northwest to explore the value of EN in a local context of urban development. The local committee experienced a lack of tools for systematically involving citizens when developing the neighborhood. A challenge which the EN tool addresses.

Regarding the application of the EN tool a series of events have been carried out. This blog post highlights two main events that illustrates how the tool has been applied.

Among many different activities local citizens were invited to take part in two different sessions hosted by the Danish Design Center (DDC). With participation from citizens DDC created a “local museum”. Citizens were asked to characterize the soul of the neighborhood – in words or paintings. The stories were exhibited and formed the “local museum”. The collection of stories can feed into the neighborhood plan as it tells a story about how the neighborhood is experienced by local citizens. Furthermore, the collection of stories will be part of the CENTRINNO Living Archive. 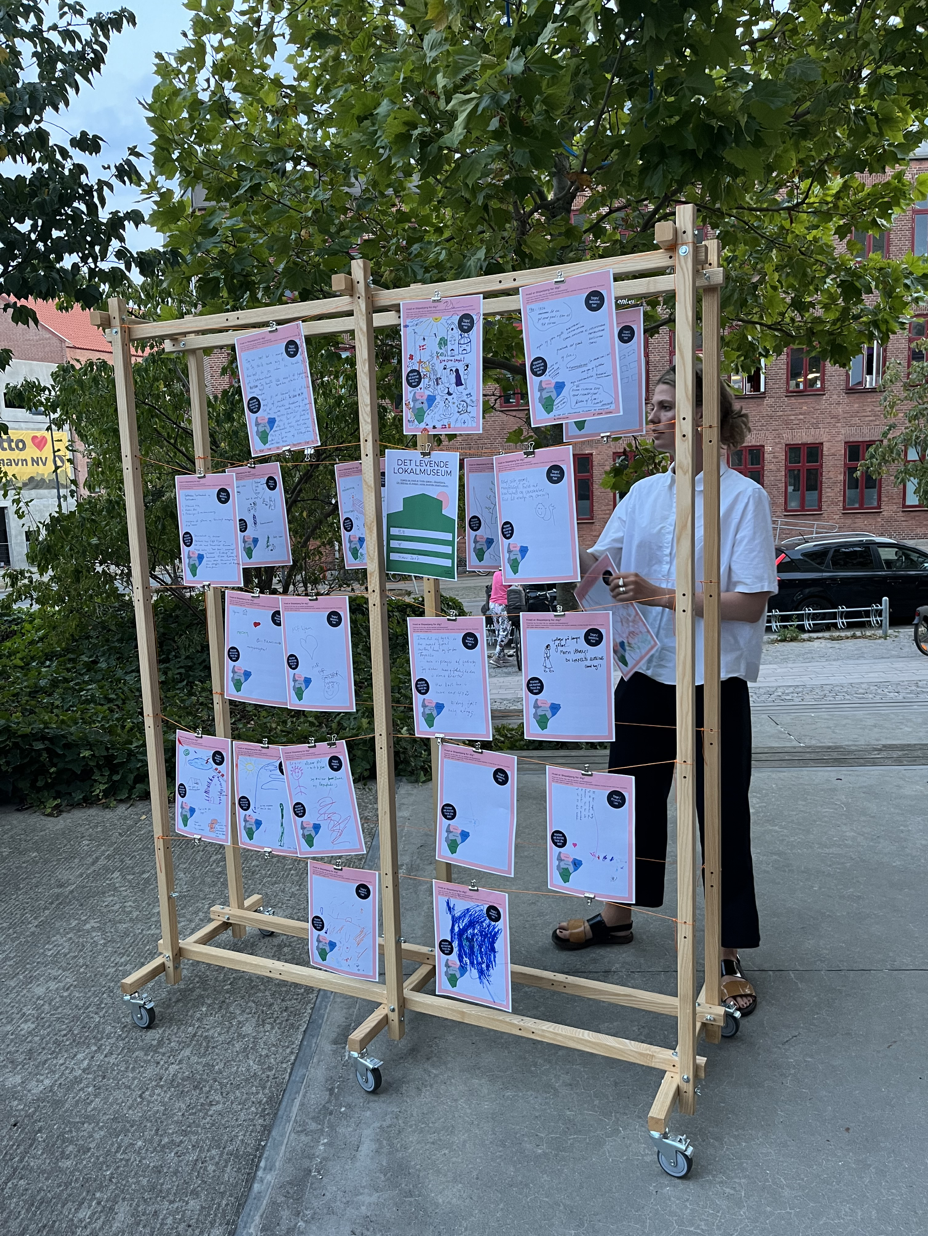 Creating a “local museum” at the neighborhood day in Northwest. Photo by Danish Design Center.

The EN tool was used to facilitate a dialogue about specific areas within the pilot site such as open squares and old buildings – areas that might undergo transformation in the coming years. The session showed how EN can bring forward different perspectives from local citizens, thus democratizing the discussion on development potentials in a neighborhood. Finally, the input can be fruitful when the local committee is developing their new neighborhood plan.

Even though most of the Copenhagen pilot team’s effort regarding the EN tool has been put into the collaboration with the local committee based in the pilot area, DDC has hosted an event for local committees across the city of Copenhagen.

In April 2022, 20 administrative members of the local committees in Copenhagen participated in a half day work session with the DDC. The aim of the event was to introduce more local committees to the tool, making it accessible for actors working in different parts of the city, thus pursuing a stronger anchoring of the tool.

Besides a general introduction to the method, discussion of use cases and potential value in an urban development context, the participants tested the method in smaller working groups to get hands on experience.

An elaborate set of materials were developed which makes it possible for the local committees to apply the method in their local contexts – e.g., for gaining citizen perspectives when working with local zoning plans or neighborhood plans.

What is next in the CENTRINNO Copenhagen pilot?

Later this year an exhibition will open in the pilot area aimed at creating a strong narrative about the neighbourhood’s industrial and craft heritage and the artisans of the future as an inspiration for the rest of the young people in the area. The exhibition will take place in the area around the youth educational institution NEXT in close cooperation the with area renewal Bispebjerg Bakke.

Copenhagen is hosting the title as ‘World Capital of Architecture’ in 2023. Throughout next year the city will be bustling with events, including debates and site visits to showcase and discuss architecture and urban planning. This will work as a platform to showcase the pilot area of Northwest with a theme on heritage and how to maintain and develop creative urban environments in former industrial neighborhood.

The upcoming CENTRINNO school activities will among other include innovation, design and construction projects in collaboration with the youth educational institution NEXT, the local Maker Space and the area renewal project Bispebjerg Bakke.

The Copenhagen pilot will continue testing concepts and business models for affordable m2 targeting creative and vocational businesses and supporting creative urban environments in cooperation with the established network of private developers, foundations, housing companies and public actors. The pilot will also continue testing the distributed hub model with network events in 2022 and 2023 with the aim of supporting local initiatives and foster exchanges and opportunities among stakeholders.