A new generation of hubs is about to be born: emerging from the Fab Lab Network and the Fab City Global Initiative, and as part of the EU founded Centrinno project, the Paris Hub Volumes has conducted research on the most inspiring European creative and productive hubs to support the activation of this new generation of 9 Fab City Hubs.

Within this research, we at Volumes have selected particular hubs because they are representative of key aspects and they unfold significant stories that are of particular interest to build a common vision for what Fab City Hub will be.

In this intent, we have organised a series of webinars called “Fab City Hub Voices” to hear directly from the people on the ground what are the main challenges they are facing in activating and carrying on such innovative places. The results of this research and the insightful conversations we have had will be shared with you in this online journal.

These posts intend to build and share knowledge about Creative and Productive Hubs, and shed light on how these places could trigger meaningful regeneration of industrial historic sites and areas as creative production and manufacturing hubs that stay true to the ecological challenges of our time.

In this first article we will share our insights about Fab Lab Barcelona and the hands-on reflections of its founding director Tomas Diez.

What is the hub about and why it matters

Fab Lab Barcelona was founded in 2007, becoming the first Fab Lab in the European Union. It is a benchmark in the powerful network of over 2.000 Fab Labs over 100 countries. The Fab City Global Initiative itself stemmed from Fab Lab Barcelona, which was its original hotbed before expanding to a global network of 38 member cities.

Fab Lab Barcelona (hereafter FLB) produces world-leading research and innovation based projects around the digital fabrication laboratory, located at the core of the hub.

This expression “around the laboratory” is especially meaningful for the purpose of this research, as FLB is a live example of the impact that a hub is able to achieve, when it is driven by a vision that goes beyond the walls of the laboratory and expands beyond the digital fabrication facilities to challenge and create new visions for the city.

As Tomas has repeatedly said during the webinar “Fab Labs are great ! They have been democratized access to technology, but they need to connect  to the city and open to its different local communities”.

According to its founder, “ we need to understand how Fab Labs can extend their capabilities beyond the technology in order to become enablers of virtuous circles of exchange with the local ecosystem”.  These challenges are a key part of the mission of Centrinno and the activation of Fab City Hubs in the project pilot cities. 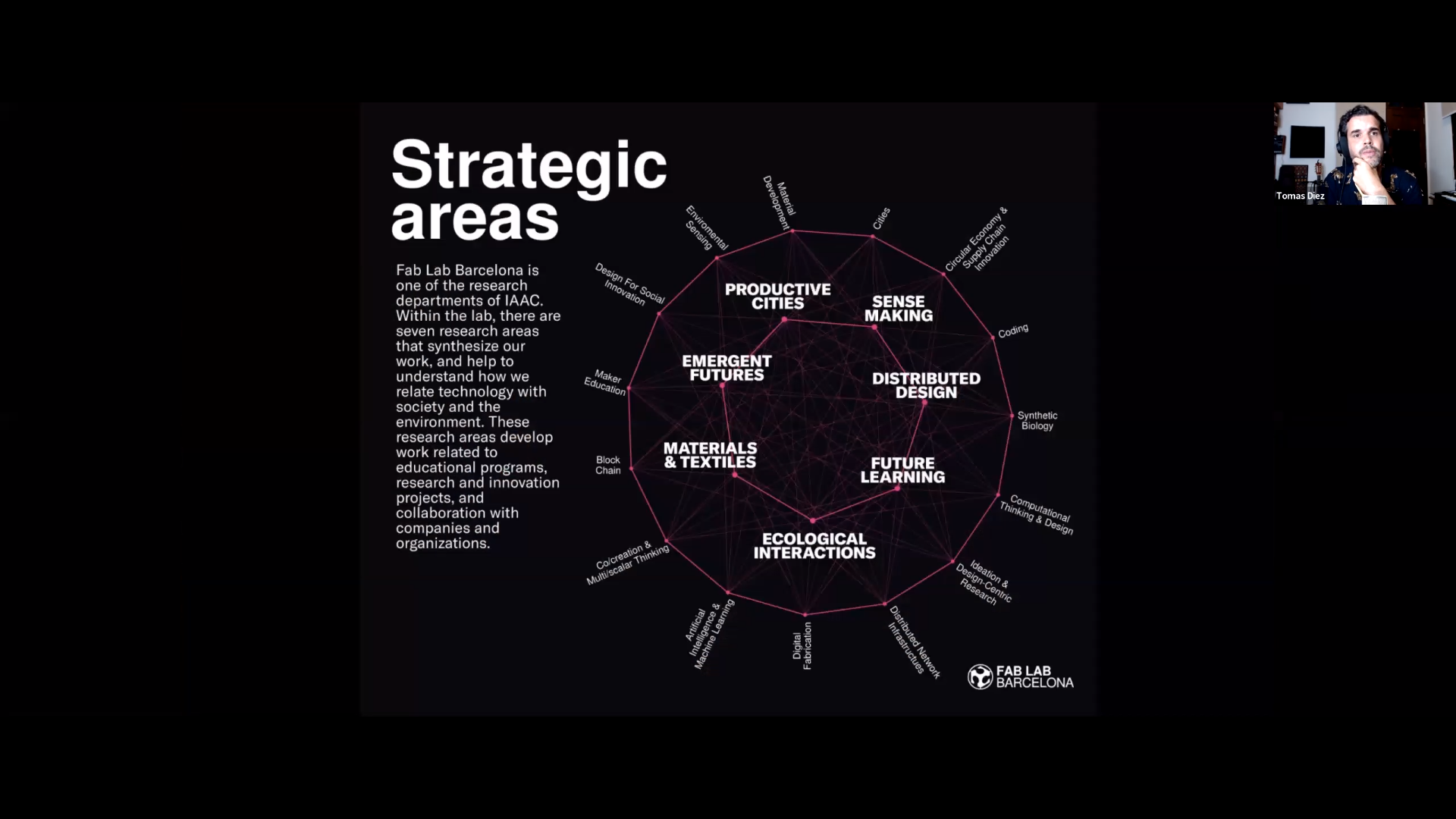 While FLB is a lab located in a physical space within a delimited and not distributed space, its trajectory and approach to innovation can be described as several layers that are built around this physical space.

The hub sits within the Institute for Advanced Architecture of Catalonia (IAAC), a world leading educational institution in architecture, urban design, digital fabrication and robotics situated in a building that was a former ceramics factory. IAAC represents the first outer layer of the FLB, which is strongly integrated in it and constitutes a fundamental pillar of the institution.

The second layer around FLB is the [email protected] District, Poblenou, formerly the main industrial area of Barcelona. FLB involves the local community and stakeholders of Poblenou in different pilot projects, feeding in and learning from the local context and engaging with the citizens.

At a city level, the hub contributes to the development of the Maker District in Poblenou, Barcelona together with the City Council.

Within this dynamic of going beyond the walls, FLB also carried out the first prototype of a FCH, precisely giving the lab a more open and inclusive dimension: The FCH offered a middleground (Besson, 2017) link between the Fab City vision, manufacturing and prototyping spaces such as Fab Lab’s and the local community. In that space citizens were encouraged to explore, test, learn and contribute to the broader activities of the hub, especially those related to the Fab City Global Initiative.

As part of the transition into Industry 4.0 and leading the Fab City Global Initiative, Fab Lab Barcelona is an example of how an approach based on human-scale and on the local everyday experience can play a fundamental role in shaping a global and international movement such as the Fab City Global Initiative, identifying opportunities in rising trends of urban regeneration.

FLB is a laboratory for ideas that are prototyped, fabricated and tested using its digital fabrication facilities. The hub aims to create spaces for collaboration between the industry and research, citizen innovation and public institutions. Working with such diverse communities is a way to foster social-economic and technological innovation in a transversal and transdisciplinary manner.

Nevertheless this multi-topic and multi-scale approach is grounded and based on a conceptualised framework that allows the hub to have a clear yet diverse agenda. In fact, FLB investigates seven strategic areas of research, which may be seen as separate and intersectional. The areas of research are as follows: Civic Ecology, Materials & Textiles, Productive Cities, Sense Making, Distributed Design and Emergent Futures.

Based on this framework, projects developed at the hub can then address fully or partially those areas of research and engage specific local and global communities depending on the specificity of every project.

Consequently, the business model of the hub is hybrid regarding its approach, since it combines education, services, and research activities as its primary business.

The starting point of the Fab City Global Initiative itself lies within FLB functioning as a hybrid space to connect the industry, policy makers and citizens. This vision led in 2014 the city mayor of Barcelona, with support from the Institute for Advanced Architecture of Catalonia, MIT and FLB to make a public commitment to have Barcelona produce everything it consumes within 40 years. This commitment marks the beginning of the Fab City Global Initiative as since then other cities and regions started joining the 2054 pledge to transition into fully circular economies.

Besides evolving inside a cutting edge institution for education, FLB  itself offers a variety of educational programmes. The hub is the coordinator of the global Fabacademy programme, the official training program of the Fab Lab Network, and it carries out a local version of the programme as well. Over the past years FLB developed iterations of Fabacademy such as the Circular Maker Academy most recently developed in the framework of the european project Pop-Machina.

FLB also runs Fabricademy that is remarkable for CENTRINNO, defined as “a transdisciplinary course that focuses on the development of new technologies applied in the textile industry, in its broad range of applications, from the fashion industry and the upcoming wearable market.”

Since 2018, FLB runs the “Master in Design for Emergent Futures”, addressing the dramatic and rapid changes the world and society are facing today in order to envision new radical scenarios for tomorrow through design and transversal thinking. The master programme also embeds and includes the Fab Academy training to provide technical skills. In that sense, it is an innovative approach of building educational programs by combining existing resources and educational bricks.

Furthermore, the lab offers learning experiences for schools and companies, which are customized based on their areas of interests.

In our conversation with Tomas during the Fab City Hub Voices event, the relevance to  foster an open source culture through open source technology has emerged many times. According to him, heritage itself could be re-thought as an open source common, and technology could help to democratise heritage. For example the use of the Digital Archive, that will be part of the Centrinno actions, could be a way  to preserve heritage from devastation but also to facilitate a transition from tradition to innovation and make innovative use of local knowledge.

Talking about the collaboration that FLB established with the Leka restaurant, Tomas emphasized the role open source design processes play in revealing a new set of values. In this project, open source technology and design are used not only to make the design of  the furniture accessible and downloadable to all but also to disclose open and honest production pipelines of local agricultural products, to make transparent and accessible information about food transformation and facilitate connection with local producers. In short, open design has revealed the value of proximity and the relevance of local ecosystems.

According to him, by embracing and supporting a culture of distributed and open source technologies and hubs, Europe could lead the transition toward a new industrial revolution that tests ways of establishing links between tradition and innovation. This could support a new value chain based on the democratisation of production means, the promotions of local and thriving economies for the local ecosystems.

The Funding Challenge: be brave, innovative and passionate

While finding sustainable and innovative economic models is key for their development, Creative and Productive Hubs’ struggles to sustain their actions are reality. This happens also because the services, products and projects are so innovative that the market still does not exist and needs to be invented.

What Tomas suggests, referring to different experiences such as the Smart Citizen Project, is that Fab Labs and Creative and Productive Hubs in general, need to bet and invest in valuable projects and long term actions. It is important to consider innovative ways of financing that are not only monetary, as for example partnerships for research support.

We should look beyond machines and immediate profit or results, and invest in social capital and collaboration that could trigger new virtuous circles and have  impacts in the long term.

With its capacity to bridge private companies with citizens and makers, FLB partnered up with Space 10 – IKEA’s external future-living lab, which is also included in the portraits of this research – to create the Made Again challenge. This is considered to be the “largest Fab City prototype to date in Poblenou” in Barcelona – “a one-square-kilometre testbed to explore how to rethink and re-engineer our production system in cities.”

The experiment took the form of a 5-day workshop, in which IKEA designers, local makers, biologists and experts in digital fabrication gathered and collected waste products from the streets, in order to later explore new products and solutions for those, through the use of technologies made available in FLB.

As this was the first session, it also featured Roberto Nocerino, from Comune di Milano, who, as the project leader, gave us a general introduction to Centrinno.

This article have been written by Volumes and is composed by parts extracted from the official report “Creative and Productive Hubs Journal” that will be soon published and by insights and reflections that came out during the webinar Fab City Hub Voices with Tomas Diez, the director of Fab Lab Barcelona, and Roberto Nocerino, Project Manager of CENTRINNO Horizon2020 European project for the Municipality of Milan.

Next Journal: Tessa Moroder, from Lottozero