The words ‘Industrial Revolution’ carry with them a certain set of associations. In the shower of sparks, the clouds of smoke, and the sounds of churning machines came an assumption – even if it wasn’t always explicitly stated – that the rapidly-developing technologies of industry was synonymous with a forward momentum; it was synonymous with progress.

It was, after all, a revolution: a creation of a new reality, the beginnings of which are not difficult to trace right through to the modern world we inhabit today. To understand the Industrial Revolution as a sign of social progress, is to likewise equate increased mechanical efficiency with an ever-increasing morality, echoing Rob Nixon’s suggestion that ‘the cults of speed, novelty, and spectacle can seem to generate their own innate morality.’ [1, p207]. 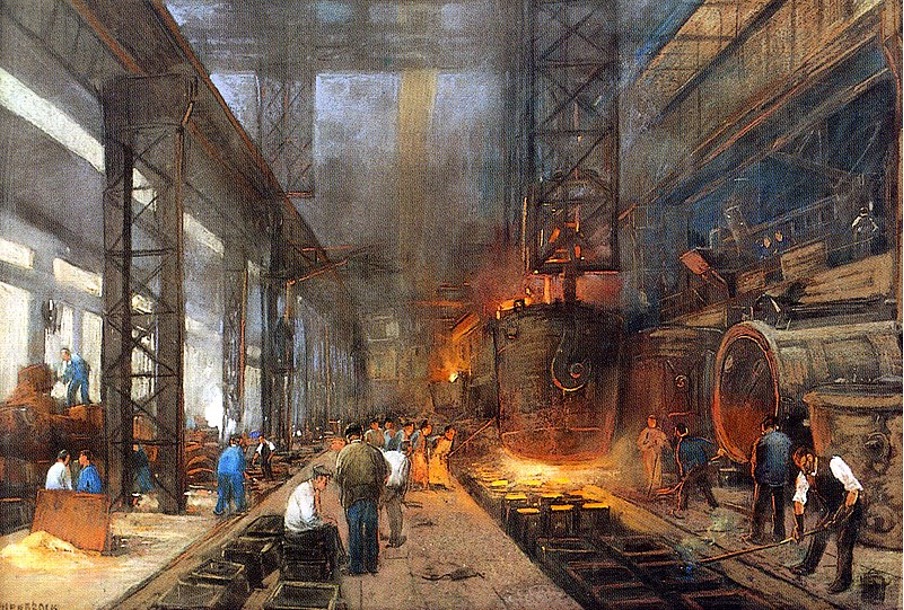 If the Industrial Revolution was one of the key events that brought about today’s world, then it is difficult to argue that such a progression could be defined as a project of morality. The planet – and Europe as an area of it – faces severe challenges: environmental collapse (a realistic term preferable to the neutrality-suggesting ‘climate change’); deepening social divides on numerous levels; an increasing economic chasm between the financial elites and those less fortunate (exacerbated even further by the Coronavirus pandemic) [3]. These problems – surely – are not the logical progression of a revolution in industry that was grounded in ethical processes.

Finding solutions to these problems requires innovative solutions, and it is solutions that the CENTRINNO Project is committed to finding. Though the project looks in various ways towards the creation of a brighter future, CENTRINNO also recognises the value in looking back, to see where we’ve come from. The Industrial Revolution – and its aftermath – is after all part of a collective heritage that links the 9 distinct locations relevant in the CENTRINNO project. When I look back, considering such a heritage, and such a technological and social trajectory, one question that comes to mind is: would the Industrial Revolution have played out differently, were it built on a different set of values? If so, how?

Ultimately, while the Industrial Revolution was characterised by important (and no-doubt thrillingly exciting) technological change, what lies beneath the capacity for industrial levels of production, manufacturing, and communication are the twin barbs of extractivism and exploitation. Respectively, these two factors broadly relate to the extraction of raw materials from the earth (often instigated by proxies of richer global powers which claim the lion’s-share of the spoils and leave little-to-none for the local place from which the materials came – see [1]), and the profiteering of financial elites from the under-valued workers whose labour makes those profits possible. This is neatly summarised by Nancy Fraser, arguing that ‘commodities are produced through privately owned means of production by exploited wage labourers and sold on price-setting markets by private firms, all with the aim of generating profits and accumulating capital.’ This devaluing extends to the natural world, and the ecological and biological bases from which these raw materials come, whereby there is a ‘positioning [of] ‘nature’ as a realm of stuff, devoid of value, but infinitely self-replenishing and generally available to be processed in commodity production.’ [4, p99-100] [5].

It is hard to understand these two phenomena – which of course are inextricably linked – as anything other than exemplary of a set of values that considers some lives, some livelihoods, and some communities as less valuable than others. The so-called ‘fourth Industrial Revolution’ of the present moment, characterised by interconnectivity of the digital, physical and social realms likewise means a dependence on the raw materials that form key components of the smartphones, tablets and laptops that define our current technological moment. That such technologies are in themselves frequently premised on, for example, the extraction of cobalt for lithium-ion batteries (primarily used for smart phones and electric cars) by child labourers in impoverished countries like the Democratic Republic of Congo and Chile traces a direct line from the notions of extractivism and exploitation of the first Industrial Revolution to the social and moral ills of today [6] [7] [8]. Certain values – and the choices of who, what and even where can be considered valuable – must be seen as driving these abuses.

Figure 2 –World map of cobalt mines, with the Democratic Republic of Congo indicated in green [9].

The CENTRINNO project is premised on a different set of values. Core to the effective functioning of the project is an emphasis on circularity, wherein material and economic flows within an area are monitored so as to ensure that what is bought and used locally, is also made locally, lessening the cost of importing materials or products, and keeping financial proceeds local. Similarly, CENTRINNO prioritises the equality of different members of the community, attempting to find ways to include those who have otherwise or previously been oppressed or marginalised. Reorienting the way that I think of industry, and changing the idea that I – and you – have of the Industrial Revolution, means also to engage meaningfully with what remains from the industrial histories, individual and collective, that proliferate in and through these industrial spaces. This, again, includes the exclusion of people through the passage of historical time, with an emphasis within CENTRINNO of unearthing and re-displaying the voices and skills that have been excluded or marginalised within the grander narrative of industrial progress.

For example, industrial spaces were generally places of making: manufacturing and production of innumerable goods took place in the shipbuilding halls, the factories, the smithing workshops and all manner of other industrial buildings. Even though industrial production and employment largely vanished from European city centres along with the industrial era (at various points in time according to location), the capacity for creation and crafting has often remained. True, this may be after a process of forced relocation, followed by a resettlement when it suits the municipality of the city in question, when there is a realisation of the capacity for artists and craftspeople in raising an area’s real estate value (read: gentrification by stealth). The fact remains however, that this type of creativity and craft nonetheless remains a consistent characteristic of these spaces. CENTRINNO therefore aims to bring together and to the forefront this type of skill in spaces of innovation and heritage. This is done by connecting the craftsmanship of people used to getting their hands dirty for industrial production with the circularity and sustainability-focused ethos of the communities CENTRINNO wishes to cultivate. It also means looking directly at what is often wilfully ignored about when thinking of the grandeur of the industrial era: the toxic, polluting environmental legacies of industrial-scale production. These aren’t immediately obvious: they may be found in both the cracked lungs of forgotten workers, or deeply embedded into the soil below.

Continually engaging with the negative aspects of the classic conception of the Industrial Revolution – and the destructive values underlining it – means looking towards the possibility of loosening its grip on the present, and putting forth new futures instead, where an ethics of environment and commonality serve as the foundations. Some words that might be associated with these futures include, but are not limited to: openness, (co-)creativity, inclusivity, kindness, sustainability, experimentation, integrity, respectfulness, empathy, learning, communication, accountability, and more besides. If everyone was to consider the potential of industrial space with these principles in mind, would we be better placed to unlock that potential? Such values underpin the central ambition driving CENTRINNO: to create a new Industrial Revolution, a sustainable transformation with citizens at its heart, formed in the industrial spaces of a different era. Taking that intention – to deconstruct and then rebuild the idea you have of the Industrial Revolution – could allow you, dear reader, to be part of that transformation too.