In CENTRINNO we are currently implementing tools, strategies and methods in 9 pilot cities with the main goal of re-enchanting heritage sites by setting up Fab City Hubs for circular economy and social inclusion.

But what if we could expand this approach to other sites in Europe and in the world?

Europe is full of heritage sites that silently claim a new life coherent with its past history, but also willing to hold true to the ecological and social challenges of our time. Everyone knows at least one of them; it could be that abandoned building next to your city apartment or that ancient mansion in the village where you were born.

It is common to dream about what they could become if revitalised, but often the dream quickly crashes with a lack of vision, or maybe a poor community engagement, or simply because “there is no money for that”.

Can we actually use Centrinno to make these dreams come true?

While pondering this big question, Volumes team – which is currently engaged in supporting the emergence of Fab City Hubs in Centrinno – decided last summer to take on a bit of a crazy project in order to explore potential answers to the above question.

The reRenaissance of the Villa Buonaccorsi 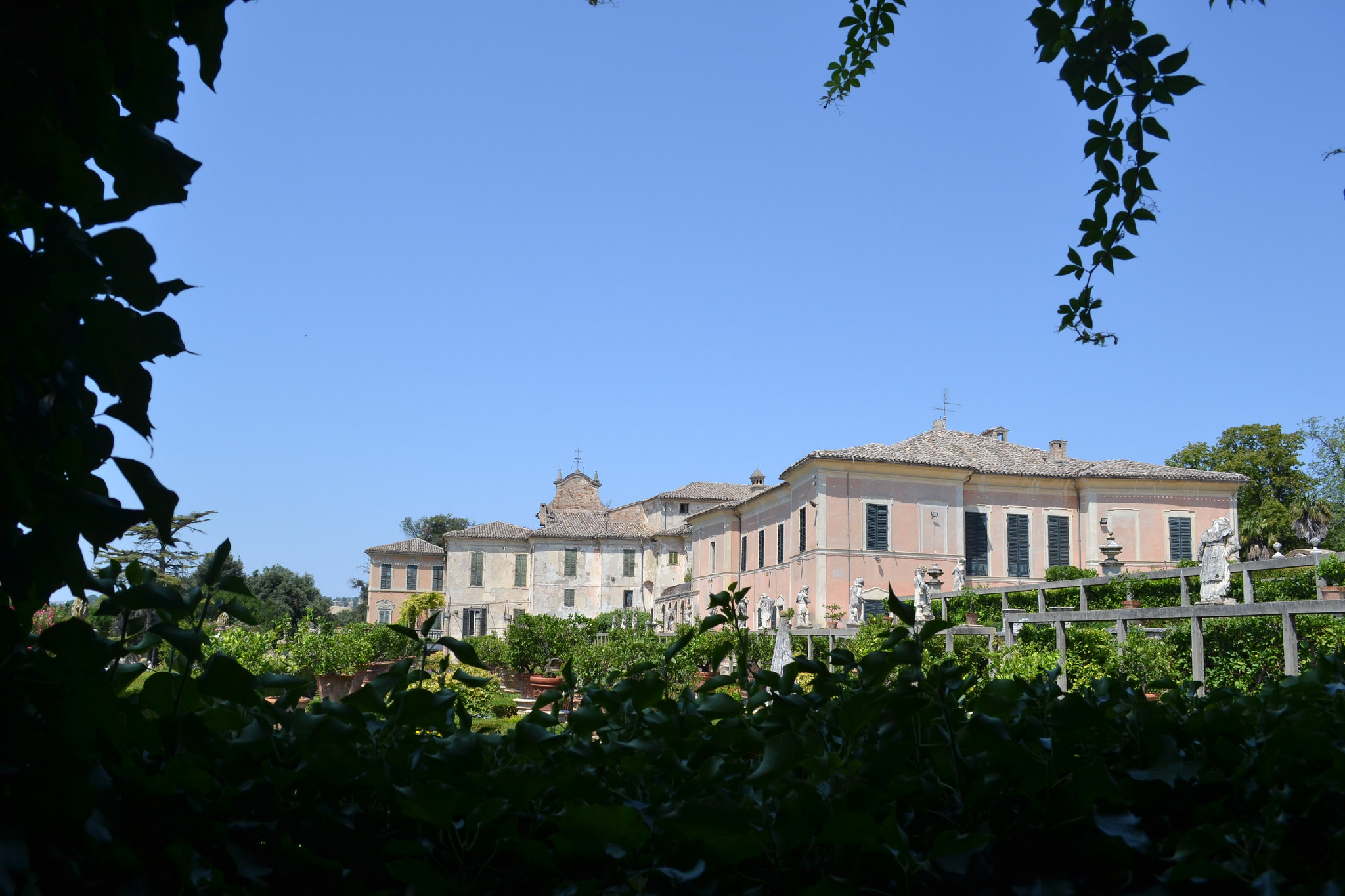 The Villa Buonaccorsi, seen from its historic gardens, maintained as is since the 17th century. – Credits: VOLUMES)

In 2020 VILLAE, a young Italian NGO approached Volumes to ask for help in order to achieve their mission: bringing back to the people an almost abandoned heritage site named Villa Buonaccorsi, situated in the heart of Mediterranean hills on the Adriatic coast of Italy, in the Marche region, two hours south from Bologna.

This gem, seated on the hills of this underrated rural side of the country since the 18th century, was set to be sold in an auction sale. For decades now, it had mainly been used for private events, mostly wedding ceremonies. That is why the local association VILLAE emerged: its founders, who grew up hiding in the gardens of the Villa, thought it could offer so much more to the locals and to the world.

VILLAE NGO mission is to dream a new life for the Villa Buonaccorsi, with the vision of converting it into a new kind of laboratory for the commons, and that’s where they called on the expertise of Volumes.

Starting from there, VILLAE and Volumes, in a constant dialogue with the local authorities, worked to raise awareness around the public cause that represented the Villa’s fate and they coined the “Villa Summer Camp”: a gathering to transform the historic Villa Buonaccorsi into a potential hub for innovation.

Villa Summer Camp, a gathering open to local and international citizens and experts to transform heritage into a creative and productive hub. 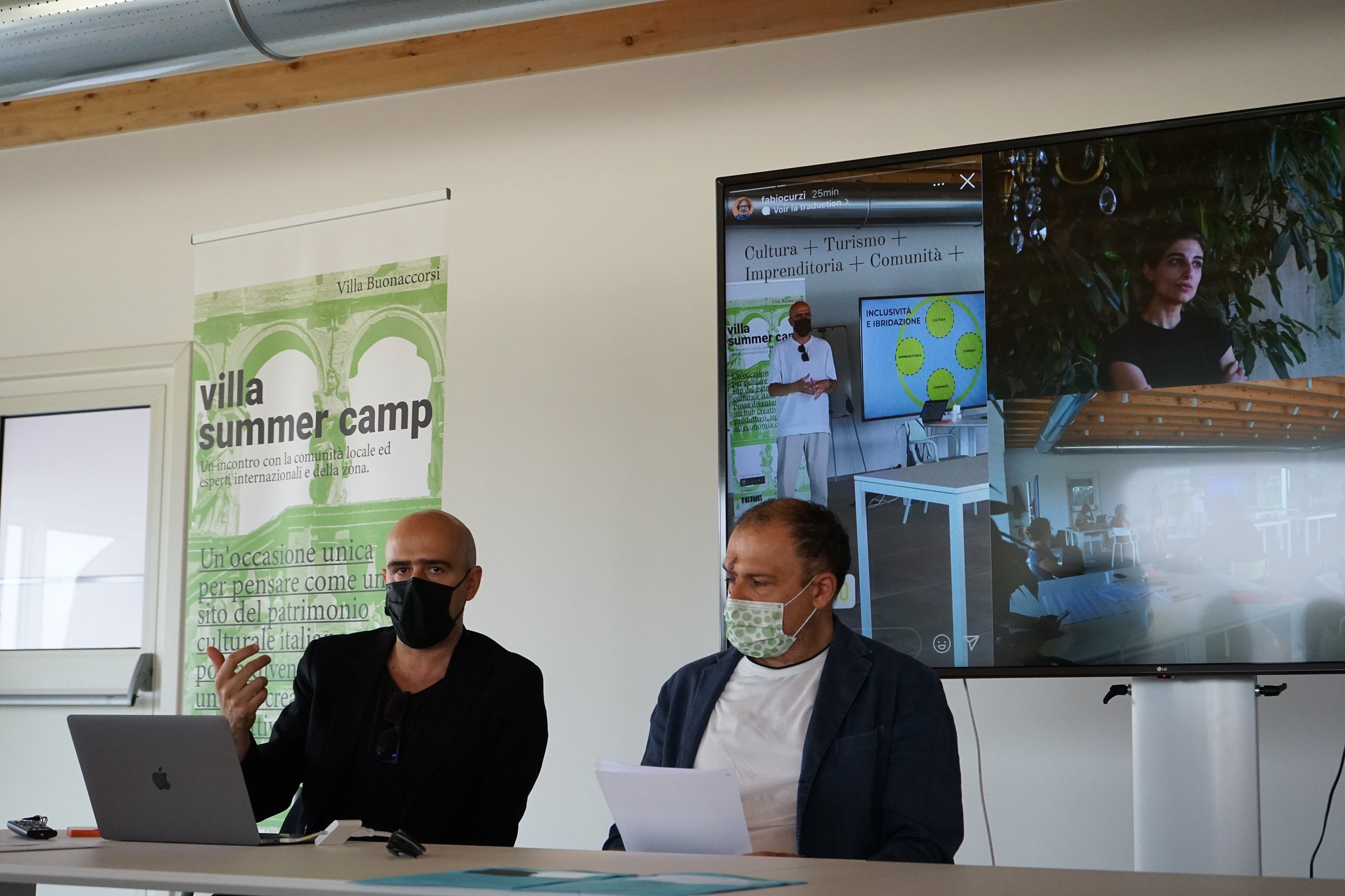 From Spain, France, Greece and Italy, a mix of urban planners, architects, tech-savvy, geographers and creatives alike (among which several members of the CENTRINNO consortium) came to the town of Potenza Picena (where the Villa is situated) to discuss the future of the one of a kind Villa Buonaccorsi.

For 2 days at the end of July, just a few days before the auction sale, these experts worked together with local citizens and partners to draft potential future trajectories of the Villa. The event was designed following the Centrinno approach and its 5 key concepts: Circularity, Social inclusion, Vocational training, Fab City Hub, Heritage.

Within this framework, four thematic workshops served as outlooks to possible futures for the Villa Buonaccorsi:

In addition, two online workshops (facilitated by our Civicwise community partner) were open to the public that could not be physically there: one about “Reinhabitation for Regenerative Tourism” and another one about “Playmaking”.

The event demonstrated the importance of giving voice to the citizens and the global community. In the case of the Villa, the work of VILLAE NGO and Volumes was crucial to collect and connect different voices of the citizens, which would otherwise have had very little visibility.

Villa Summer Camp succeeded in creating a dialogue between the local authorities and the community, and in thinking about the future of the Villa Buonaccorsi on a broader, international scale thanks to the energy of Centrinno.

And then the breaking news came: “Villa Buonaccorsi will be public!”

A few days after the Villa Summer Camp, an anonymous buyer from Rome swooped in unexpectedly. Fear arose within all the people that were increasingly involved thanks to the work of VILLAE and Volumes. It became clear to the city administration that leaving the villa to what seemed to appear as a speculative fund, and seeing it shredded apart, was no longer an option.  the citizens were already claiming back their ownership of this historical landmark.

A few days later, in a not so unexpected turn of events, the Italian Ministry of Culture has finally decided to buy the Villa, and on top of it, the Region accepted to fund its renovation.

In early October, the Ministry of Culture officially confirmed it with the announcement “the Villa will be public”.

A trajectory is set, it will be a long journey

After the news that the Villa will become public for the first time in decades, VILLAE and Volumes are now focusing on the next steps of the process, principally working on how to secure the inclusion of the citizen’s voices in the future governance of the site. A new challenge is set, and more will be to come!

Facing the institutions, we know it will not be easy to legitimize why the community should have a voice in the key decision of the Villa.

To support our cause, we are currently researching previous examples of citizen involvement in governance strategies for heritage sites owned by the public administration. If you have any references or ideas to share, feel free to get in touch: we would be delighted to engage in a conversation with you!

Why did the magic happen?

Villa Buonaccorsi’s case and the Villa Summer Camp show so far how local communities connected with international organizations can achieve what seemed to be a crazy mission: having the Ministry of Culture to buy a neglected heritage site in an underrated rural region of Italy!

We have observed during the whole process the extreme value provided by a local organization able to engage with local authorities (VILLAE NGO) but also to connect with an international, broader framework (provided here by Volumes team and the Centrinno project) and to engage with communities through a physical gathering (the Villa Summer Camp).

We are aware that Centrinno is still currently working on producing evidence and impacts of its strategies and is still far from achieving tangible results, but we see in Villa Buonaccorsi the first prototype of deployment that could be later applied to other sites, once Centrinno will be more mature et fully ready to replicate.

You can also follow @weVolumes on Twitter for continual updates on the future of the Villa Buonaccorsi. Also, you can visit VILLAE NGO website at https://vill.ae (they also have a blog with fresh updates, but of course it is in Italian or on Instagram at @villae.ngo.