Most European cities, large and small, face the challenge of transforming industrial heritage sites. Industrial areas, once hotspots of infrastructure, workers, knowledge, and innovation, have often been abandoned, reduced or relocated due to urban changes, and a shift towards a global extractive economic model. As a consequence, not only historical buildings are being demolished, but neighborhoods are losing elements of their cultural identity and traditions.

The importance of preserving aspects of the local identity combined with the necessity of developing a more resilient and sustainable productive model requires innovative strategies for sustainable urban regeneration.

Within the CENTRINNO Horizon 2020 European Project, Fab Lab Barcelona explores an alternative urban regeneration of Poblenou’s neighborhood in Barcelona as a creative, locally productive, and inclusive hub. The strategies tested by the local team, connected with the Fab City approach for globally connected and locally productive cities and regions, propose a new urban, economic, social and industrial model that fosters local sustainable production and cross-collaboration with stakeholders and existing initiatives in Poblenou. Maker skills, industrial heritage, manufacturing practices and circular principles are being combined to test a collaborative and inclusive local economy model. 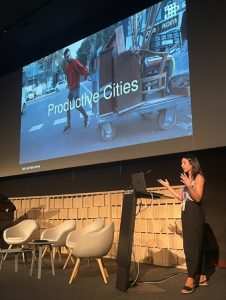 Biography: Milena Juarez (female) is a Brazilian environmental engineer with a master’s in Interdisciplinary Studies in Environmental, Economic and Social Sustainability and specialization in Urban and Industrial Ecology at the Universitat Autònoma de Barcelona. With a large experience in research, Milena has been actively involved in various interdisciplinary research projects in the field of circular economy, resilient cities, co-creation, and sustainable food. She currently coordinates the Barcelona pilot for CENTRINNO EU project at IAAC and works as an action researcher for the REFLOW and FOODSHIFT EU projects. As one of the responsible for community engagement at Fab Lab Barcelona, Milena supports the local activities at the Fab City Hub, a co-creation distributed space to design the future for urban self-sufficiency.

Pablo Muñoz Unceta (male) works as a researcher at the Institute for Advanced Architecture of Catalonia in Barcelona. He works in EU funded projects on productive cities and circular economy. His background is in architecture, planning and urban design and he holds a MSc in the European post-master of urbanism at TU Delft. He has professional experience in Latin American and Europe in different projects and institutions, having worked on topics such as participatory planning, circular economy, social housing and urban regeneration. He has worked for the Municipality of Lima, the World Bank or the Metropolitan Housing Observatory of Barcelona. As researcher, he has been involved in projects with PUCP university in Lima, TU Delft, or Wageningen University & Research in the Netherlands. Pablo collaborates with offices in Rotterdam, Barcelona, Madrid, and Brussels in projects at the intersection of sustainability, spatial analysis, and urban and housing policies.